MSC Cruises and Chantiers de l’Atlantique celebrated the start of the floating of the company’s newest and most technologically advanced cruise ship today, as well as the laying of the first keel block for the next ship of company cruise. Both ships will use liquefied natural gas, making them the first ships built both in France and for MSC Cruises to run on LNG, as well as to be equipped with other new environmental technologies.

As part of the launch ceremony, MSC and the shipyard discussed in more detail plans to install a test fuel cell system on board the new cruise ship, the MSC World Europe. The system is seen as a demonstration that will help advance fuel cell technology. The system, based on Bloom Energy’s technology, is a solid oxide fuel cell (SOFC) which will consist of two 75 kW modules. Fuel cells using LNG will generate electricity generated by electrochemical reactions.

Chantiers de l’Atlantique described the SOFC cell by saying that they use ceramic materials allowing high temperature operations which ensure high electrical efficiency. They also recover heat from the exhaust gases, which they believe could lead to long-term energy yields close to 90%. Using the SOFC solution, they say, will also reduce GHG emissions by around 30% compared to conventional dual-fuel engines currently installed on LNG-fueled ships. The shipyard also said the technology will be compatible with many fuels, ranging from LNG to methane, methanol, ammonia and hydrogen, as future fuels become available.

“I am proud that we were able to carry out, with Chantiers de l’Atlantique as partners, the launch of these new LNG vessels – the first ever built in France”, declared Pierfrancesco Vago, Executive Chairman of MSC Cruises during the ceremonies of ‘today. â€œThey will also incorporate fuel cells as new pilot technologies to make these ships even more efficient. We are determined to take new steps and we know that we can count on the continued support of our suppliers, partners and governments to jointly build an ever more sustainable industry.

In addition to fuel cells, the MSC World Europe uses other technologies including selective catalytic reduction systems, shore-to-ship electrical connectivity, advanced wastewater treatment systems and an underwater radiated noise management system to reduce its environmental impact. MSC is also announcing that it will explore the use of organic and synthetic forms of LNG as they become available on the market.

The MSC World Europe also holds several other accolades, including being the longest cruise ship built by MSC. At 1,060 feet in length, the ship’s gross tonnage was estimated to be between 180,000 and 200,000, meaning the class follows Royal Caribbean International’s Oasis class and rivals Genting’s Dream class, among the most major cruise ships in the world. The MSC World Europe will have a maximum capacity of 6,334 passengers with a crew of over 1,400.

There will be a wide range of new amenities for passengers on the ship, including six swimming pools and 14 hot tubs, as well as a 340-foot-long boardwalk that will be partially indoor and partially outdoor. The cruise ship will have a total of 13 restaurants, including six specialty restaurants, and more than 2,000 cabins in 19 different categories. In total, 65% of cabins will have balconies.

The float out of the MSC World Europe started today after the keel-laying ceremony for the MSC Euribia, an additional vessel in a previous class which is however also equipped to operate on LNG. The MSC World Europe is moved to the development wharf with delivery scheduled for November 2022. It will make its debut from Dubai before repositioning itself in the Mediterranean in summer 2023. The MSC Euribia Delivery is scheduled for 2023 while work on the second world-class cruise ship is expected to begin construction in 2023. 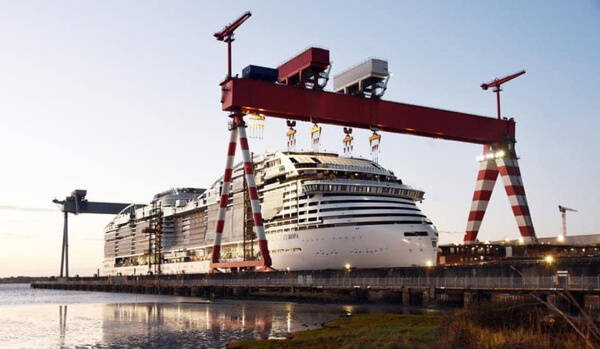 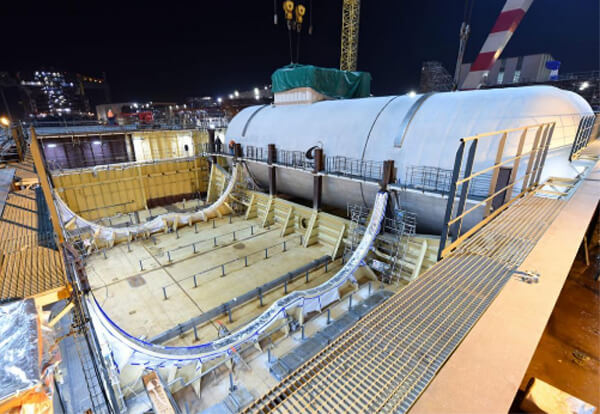