[Stay on top of transportation news: Get TTNews in your inbox.]

Ford Motor Co. officially plants its flag with the launch of an all-electric version of America’s best-selling truck, aiming to overtake Tesla Inc. and dominate the electric vehicle market.

The Blue Oval brass said so during the official launch of the F-150 Lightning on April 26 at the Rouge Electric Vehicle Center in Detroit, a new electric vehicle manufacturing plant in Ford’s historic Rouge complex that has already been expanded to increase production capacity to 150,000 units per year. The event highlighted the symbolic resonance of the Rouge, the employees who build the Lightning, the customers (some of whom were invited) and the automaker’s electric ambitions.

“We fully intend to be the No. 1 electric pickup manufacturer,” said CEO Jim Farley. “And then with the huge investments — $50 billion in electric vehicles, battery manufacturing, our expanded lineup that you haven’t seen yet — we plan to challenge Tesla and all comers to become the number one maker of electric vehicles in the world.

“It’s something no one would have believed just two years ago from us. Take a look at this truck and believe it.

The Lightnings will begin shipping to customers in the coming days, Farley said, starting with the Ford Pro model for commercial customers. This is where the rubber meets the road.

“More and more customers over the next few weeks are going to start getting their Lightnings. And that will be the real test of what people really think of an electric truck,” said Sam Abuelsamid, automotive analyst at Guidehouse Insights.

“It will be the first super-high-volume electric truck,” he added. “And because of the segment it’s in – it’s the most popular segment in the US market – the response to this vehicle will be a great indicator of how the US consumer will adopt electric vehicles over the next few years. .”

For Stanton Hunter of New Jersey, the Lightning will be his first pickup truck as well as his first electric vehicle. He has a Lightning on order, with an expected June build date, and was among the customers Ford invited to the launch.

“I’ve always wanted a pickup truck,” Hunter said. “But the gas mileage has never really been right with me, so I decided now was probably the best time to do it.

Highlighting a possible challenge Ford now faces: Hunter had originally planned to buy a Bronco SUV, which Ford resurrected last year, but it was so far down the reservations list that he jumped on the Lightning when the truck controls were opened.

Already, Ford executives have repeatedly said the company is oversubscribed for its first wave of electric vehicles. The automaker capped reservations on the Lightning after securing 200,000, and the 2022 model year is no longer available for retail orders. The 2023 model year backlog (for existing reservation holders) will open in the summer for deliveries in the fall.

Ford executive chairman Bill Ford acknowledged it’s a bit of a dilemma, saying he recently spoke with potential Bronco customers at an event in Texas who are still awaiting build dates for their vehicles. .

“So it’s really through a lot of our hot products, and we’re doing everything we can to try to communicate with them,” he said. “We probably need to do a better job of that.”

But between the coronavirus pandemic, demand outstripping supply of raw materials needed for electric vehicle batteries, an ongoing global shortage of semiconductor chips and other supply chain issues, production has been constrained.

“The good news is that there is a huge demand for our products, but it is frustrating not to be able to produce them in a timely manner. Our team has done a great job of eliminating bottlenecks, but new ones are emerging,” said Bill Ford. “It’s just the world we live in, unfortunately. But we don’t want to lose those customers. We don’t ask them to move away and we do our best to accommodate them.

He also acknowledged that the company is “planning” to invest further down the supply chain to shore up the minerals needed to build batteries.

Production constraints aside, Ford executives issued an optimistic note April 26 about what an electric F-150 means for the future of not just the company, but the country as a whole.

Ford’s F-Series truck line has been America’s best-selling vehicle for 45 years. And executives touted the Lightning as a work truck capable of everything its gas-powered sibling is — and more. Farley pointed to benefits such as instant torque, an on-board generator, the “frunk” (or front trunk) that offers 14.1 cubic feet of cargo volume, and over-the-air software updates – “like a smartphone that can tow 10,000 pounds.”

The mainstream appeal of the F-Series, along with the improvements promised by an electric version, is what some sustainability advocates are excited about.

“I think the F-150 going electric is a big old flag in the sand of electric vehicles meeting you where you are. You don’t have to come and see them,” said Dave Mullaney, director of carbon-free mobility at RMI, a nonprofit focused on decarbonization and other energy issues.

The electrification of the F-150 is “huge”, in Mullaney’s estimation, because of the impact it could have on truck fleets – but also on the average consumer, who until recently didn’t had no electric truck option.

“This is a key inflection point for the electric vehicle itself,” he said.

Pricing for the F-150 Lightning starts at around $40,000. The truck can travel up to 320 miles on a single charge, according to EPA estimates, and has a targeted maximum payload of 2,000 pounds.

“Our customers are going to benefit from capabilities that no other electric truck will ever be able to offer,” Farley said. “But for thousands of dollars less than our competitors’ trucks – every time they go on sale.” 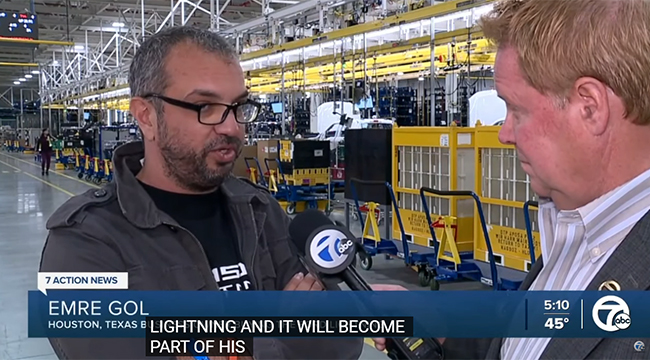 Emre Gol, holder of the Order of Lightning, gives an interview to a Detroit television station. (WXYZ-TV)

Overall, Ford is now targeting annual electric vehicle production of 600,000 units by next year and 2 million by 2026.

Crosstown rival General Motors Co. plans to introduce 30 new electric vehicles globally by 2025 and is aiming to produce 400,000 electric vehicles in North America this year and next. It plans to have 1 million units of EV capacity in North America by the end of 2025. An all-electric Chevy Silverado pickup – which GM announced on April 26 has garnered 140,000 reservations – should be launched next year.

Meanwhile, Lightning order holder Emre Gol plans to use his electric truck for the job. He owns a home improvement business and said it’s not uncommon to drive 250 miles a day in the Houston area. He currently drives a Tesla Model 3 and enjoys the savings on fuel and maintenance.

“Electric vehicles are the way to go,” he said. “We use these things for work.”