Bhubaneswar: Giving a big boost to rural connectivity, Chief Minister Naveen Patnaik today laid the groundwork for 55 bus stations in 22 districts of the state in virtual mode. These bus stops will be installed at islet level taking into account several factors such as distance from the district headquarters, economic activity, places of tourist interest, existing means of communication and other factors.

Speaking on the occasion, the Chief Minister said that rural connectivity has always been one of his government’s top priorities and that he believes it is a step in the right direction. This will connect the rural populations of the state with better communication infrastructure, benefit them to a great extent and prove to be another milestone in the state’s communication scenario.

Odisha State Road Transport Company connects Odisha and all its main reasons with its fleet of buses.

Thanking the Odisha State Road Transport Corporation for this initiative, he added that the OSRTC is making further progress to reach the whole state and connect people through an integration of infrastructure development and a network of effective communication.

He praised the constant innovation and improvement in the quality of service provided to the people of Odisha, many of whom depend on buses for economic, educational and recreational purposes.

Participating in the program, Minister of Commerce and Transport Padmanabha Behera said his department is working to improve the state’s transport scenario to realize the vision of the chief minister of providing better communication infrastructure to rural people.

Chief Minister’s Secretary (5T) VK Pandian moderated the program. The Principal Secretary of Trade and Transport, Madhu Sudan Padhi, delivered the welcome speech and the CMD of OSRTC offered the vote of thanks.

Here is the list of locations for the new bus stops: 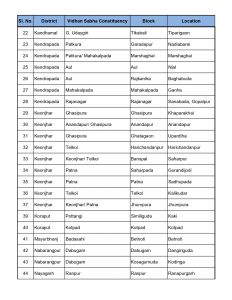 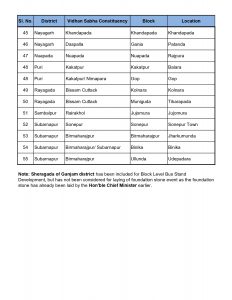